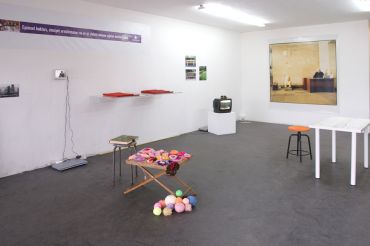 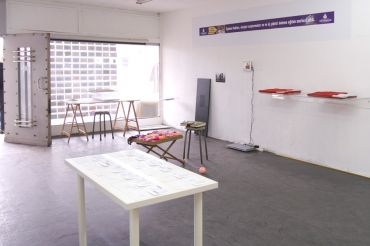 The Department of Experimental Design at the University of Art and Industrial Design Linz  in Istanbul at Gallery 5533, Dogzstar, and Mimar Sinan Fine Arts University.

This April 2010 presentation of artworks at Istanbul’s Off-Space, Gallery 5533, (opening on Saturday, April 3, at 3 p.m.) will feature a representative selection of contemporary productions by young Austrian artists. Videos, photography, objects, performances as well as audio installations will be presented to reflect the artists’ personal experiences as well as their social and political backgrounds.

The exhibition will be accompanied by talks with the artists at Mimar Sinan Fine Arts University as well as by an evening with experimental electronic music, art projects, and performances at Dogzstar Club Istanbul (Friday, April 2, 2010 at 10 p.m.).  These events aim to stimulate productive exchanges and discussions. Professor Dr. Martin Hochleitner, Director of the Gallery of the Federal Province of Upper Austria, together with Andrea van der Straeten and Hubert Lobnig from the Department of Experimental Design of the University of Art and Industrial Design Linz curated this show.

This exhibition in Istanbul constitutes the second phase of an ongoing exchange between the Department of Experimental Design of the University of Art and Industrial Design Linz and the young and vibrant art scene of Istanbul. During their stay at Yildiz Technical University in Istanbul as a part of the Erasmus programme, two students from the Department of Experimental Design, Oona Valarie Schager and Ufuk Serbest, initiated, curated and organised in Linz the first exhibition of young artists from Istanbul.

In April of 2009, this show entitled  “Inspiring Stanbul” brought the work of young Turkish artists to the center of Linz for the first time.  This event resulted from the co-operation between the University of Art and Industrial Design Linz and “Linz 09 – European Capital of Culture”.

Curated and organized by  HUBERT LOBNIG

Works featured in the exhibition:

ULRICH FOHLER, “Our Flags (Are the Same)”  One turkish flag, One austrian Flag, two boards, 2010
Two folded national flags lie side by side. Shapes and colours are congruent, making it practically impossible to assign them to any specific country; their significant qualities as national flags and their representative symbols disappear in the folds and stacks of fabric. Through simple folding, this work achieves a formal rapprochement between two states and highlights the interchangeability of national identities.

ASENA HAYAL, „zusammen,birarada“, plexiglass, 2010
Differences across intercultural dialogue are a tool for integration. A mutual language forming between Linz and Istanbul makes it possible for individuals of two different cultures to come together. Languages are important in this interaction. The project is an installation involving two stationary and one moving code. When the moving code aligns with the stationary codes, either “zusammen” or “birarada”, words meaning “together” in German and Turkish, appear. The moving key code symbolises intercultural unity and mutual language.

VERENA HENETMAYR, “in-between”, installation in public space, medium-density fibreboard (MDF), 1.2 m x 0.4 m., 2009
A seat, for example, a bench, transfixed to a wooden board creates two sides. To recognise and see the other side of the board, one must either look or listen through the holes drilled at eye level or just stand up and change places.

SIGRID KRENNER, “Nur für Euch”, Installation, Video, cup, almonds,  2010
The video installation “Nur für Euch” deals with a traditional method of appropriation: insalivation. The artist puts chocolate-coated almonds in her mouth and sucks off the chocolate, “cleaning” the almonds meticulously with her saliva to present them to her guests with apparent liberality. This work flirts with the very personal “signature” of marking objects with bodily fluids and the resulting rejection.

KATHARINA LOIDL, “the man, the wolf, the sheep and the cabbage”, looped stop-motion animation, 2 min., 2009
A logic puzzle known around the world uses the ambivalent feelings between East and West and their paradox incompatibility as a theme. The quasi-naive presentation technique of shadow play in an endless sequence of moving to and fro between the two banks gives the work its shape. What at first glance appears to be the best solution for “harmonising” this interrelationship may prove to be a miscalculation and in fact demands a more farsighted approach.

AGNES MIESENBERGER, “A midsummer nightmare”, DV PAL video/animation, 2.40 min., 2008
The antiquarian-futuristic equipment used by the band “Las Venus” turns the past into the future. This music clip is a nightmare composed of digital video and historical illustrations in stop-motion technique.

“The Bumblebee Fur Coat”, DVD, DV-PAL video/animation, 2:00 min., 2007
Do we still have to wait to get a fur coat as a present?
A story about a wish and will as told with animated hand-drawings assembled on the computer.

STEPHANIE MOLD, “Hallo Gümüshane”, video, 40 min. 2009
Turks born in the East Anatolian town of Gümüshane live in Linz. During his visit to the Lentos Art Museum in Linz, the stools used in the museum fascinated the mayor of Gümüshane. Mold who used to work as a museum guard at Lentos saw him admiring the furniture. For this reason, wearing her guard’s uniform, she traveled by bus to visit him in Turkey and present him with such a stool. The purpose of this trip was absurdly disproportionate to the required input of time and money; outside the museum’s premises her guard uniform looked grotesque and actually transformed her into a fictional character. Filmmaker Karolina Szmit accompanied her on this journey.

SANDRA OBWEGESER, PAMELA LITZLBAUER, “within my recollection”, 6 min. animated film 2009-2010, Idea, production design, editors, directors: Pamela Litzlbauer / Sandra Li Lian Obwegeser, Technique: stop-motion, SLR camera, 6 animated tales
This film is based on dreams and dreamlike recollections executed in six scenes. The observer’s gaze is drawn to a surreal atmosphere in which reality and fiction flounder like fish caught in a net, flit across the water like shadows, and in which fitted kitchens watch themselves being drawn.

CHRISTINE PAVLIC, “The Bench, the Yarn and the Drill Machine ...”, C prints, 2008
The wooden slats of benches in public space are perforated by a drill and embroidered in traditional style with needle and yarn, thereby referencing expressions of local and regional everyday culture. By choosing to use embroidery in wood, the artist’s theme refers to a kitsch homey domesticity that verges between a sense of wellbeing and the insufferably stifling feeling generated by benches that simply invite people to sit down. The project, executed in Tyrol, was documented in photographs.

ANTONIA PROCHASKA, “Muschihäkeln in Istanbul”, wool, needles, photos, photo album, flyer, 2010
The participants crochet and talk in loosely organised, communicative meetings announced by a flyer and on the Internet. This feminist project by Antonia Prochaska attempts to involve a great variety of people with highly different cultural, religious and work backgrounds.

JOHANNES RAMSL, “Process Paper”, installation, 2010
Certificates are pieces of paper with printing or writing on them. Their value derives from their use by official authorities. Symbols and signatures transform them into documents. In this work, the artist’s collected certificates and references are torn into shreds and then dissolved in water. With a deckle, sheet after sheet of new, “ungraded” paper is created.

NORA RIEDL, “My Friend, the Mayor of Istanbul”, poster work executed in the city of Istanbul, original size 1.7 m. x 30 m. June 2009
The starting point of this work was a chance group photograph taken of some students, including the artist, Nora Fiedl and the Mayor of Istanbul, Kadir Topbas, who during the artist’s stay was featured on all municipal advertising posters. This photo and the imagine friendship with Kadir Topbas formed the nucleus of the artist’s wishes for change in Istanbul. Instead parks, motorways or sports halls, when the artist asked the mayor to inaugurate a building housing a gay rights office, a department for gender studies and a centre training women to defend themselves against domestic violence, she was surprised that he was happy to perform these tasks. Although the huge banner advertising this event was illegally hung from a bridge above an eight-lane motorway and removed after just a few hours, media response to the action was very strong.

KAROLINE RUDOLF, ANTONIA PROCHASKA, “18 October 2008”, installation, bed-sheets, sewing silk, sequins, wire suspension system, 2009
In autumn of 2008, while artists Karoline Rudolf and Antonia Prochaska were staying in the city of Villach, a right-wing populist politician Jörg Haider died in a car accident that was his fault.  Quite unintentionally, the artists witnessed the massive mourning, despair and elevation to cultural icon that the local press and population accorded Haider. Some compared the death of Carinthia’s most prominent politician with the mourning for Lady Diana Spencer; even the local radio stations continuously featured Elton John’s “Time to Say Goodbye”.

OONA VALARIE SCHAGER, UFUK SERBEST, “Simplification”, photo print on rigid foam board, 4 parts each 42 cm. x 60 cm., 2008
Ever since their introduction, newspapers, information carriers, have not only been employing the medium of writing, but complemented their content with pictures and illustrations. “Simplification” focuses on these concrete/figurative messages to zero in on visual language and its effects. The daily newspaper becomes an artwork and demands its completion by the recipient. Quotes, not dictations are the objective.

STEFAN STIPEK, "front window #2", 1m 00 sec, 2009, "front window #3“,  2m 01s, 2009
Situated close to the city’s main square, Pfarrplatz is a square at the centre of Linz. Its re-organisation from a place for cars into a place for humans has created a centrally located open space.  Not only can it be adapted in a variety of ways, but it also provides a new perspective on itself and its surroundings. After moving into a flat directly on-site, the square became an eye-catcher for the artist. As an object of scrutiny, Stipek analysed the area using stop-motion studies. In due course, he carried out various experiments in which the surface functioned as a kind of drawing paper and/or stage in the broadest sense. This among other factors inspired the series “front window”.