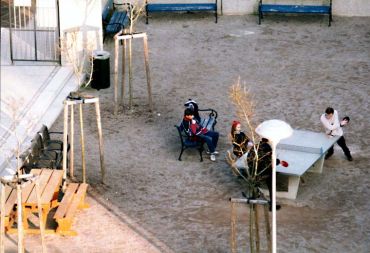 TIGERPARK Tigerpark, in a way, is an extension of private space into the city. It is relatively small, almost reminiscent of a front garden, which  in combination with its strict, clear layout  lends it an almost semi-private atmosphere. Most visitors are people who live in the neighbourhood. The "Tigerpark" room, on the other hand, acts as an extension of public space into private space. Tigerpark itself is a park owned by the Municipality of Vienna, while the "Tigerpark" room is a former coal dealer's shop in the ground floor of our house. It serves as a workroom, office and room for presentations. The front door, which has been put back in, opens directly onto the pavement of Tigergasse, the street after which the park was named. On the other side of the street is the park. Tigerpark offers interesting opportunities for activities. Some structures are inherent in its basic layout, others have formed over the years through the way how people use the park. Just make these structures visible (or disturb them), and you'll intensify communication instantly. Small and narrow, the park "compresses" groups and problems, so to speak, which gives it a kind of model-like quality  you could get the impression that that's the way life works. Tigerpark comprises a whole range of activities, meetings and events in Tigerpark or in the "Tigerpark" room. Planned on a short-term basis, they are usually announced in the neighbourhood, either just verbally (as in the case of the children's race) or by posters, handbills or mailings (depending on the specific occasion), and will address different audiences. Various forms of cooperation with artists and invitations to people, groups or initiatives with similar interests are being planned. Tigerpark is also a label. Tigerpark(park) is situated between Tigergasse and Lerchengasse in Vienna's 8th district. When I moved into Tigergasse 17 in 1987, a part of the gap that existed between some buildings was used by residents as an area where they could let their dogs off the leash, so that it could hardly be used for any other activities. The second half of the area was private property, surrounded by billboard walls, with a half-dilapidated one-storey house and a small garden where children used to sneak in to play football. In 1991 everything was torn down and in 1992 three-year construction work for a three-floor underground car park began. After completion of the work and a one-year interruption of building activities Tigerpark was laid out above the car park; it is surrounded by fin-de-siècle apartment buildings, the Maxi-Böhm-Hof (the only municipal housing estate of the  otherwise upper-class  8th district) and a pseudo-classicistic new building (all of them with four to six storeys). Pfeilgasse, which runs through the park, is closed to cars there and is only open to pedestrians and cyclists; it divides the park into a larger part, the park as such, and a smaller part with a steppe-like dogs' area littered with dog shit and a working and storage area, separated by a huge fence, of the Vienna Garden Department. Tigerpark is a model-like park. Maria Auböck's design is based on a strict, balanced layout. The park as a whole represents a kind of cosmology where everybody should be able to find his/her place. Children, teenagers, visitors looking for some peace and quiet, ball and table tennis players (soccer is prohibited), elderly people, and dog owners  all separated from each other by beech hedges and high or low fences. A wall and bars close the area off from the street. Skateboarding, cycling and soccer are not allowed in the park; dogs are not permitted, either. Officially, the park is closed for visitors "at nightfall", but the park authority's interpretation of the expression "at nightfall" is quite liberal. The public debate on the layout of the new park was rather short, ending after two discussions (with scant participation) on the plans that had been published. Afterwards work on the park was started and eventually ended three years ago. Still, the park is visited and used today by a very varied range of people and groups who have taken possession of it in a number of interesting ways. In the surrounding neighbourhood there is much need of green, open space, of room to play for children and places to shit on for dogs. After the birth of our daughter we spent a lot of time in the park and we got to know many people who come to the park. One of the interesting things about the park is that it is situated in a sort of border area where the interests of the bourgeois, upper-class residents of the 8th district meet with those of immigrants and young people who live around Lerchengasse, Tigergasse and Albertgasse (closer to the more down-to-earth 16th district), because flats are cheaper there than in the areas nearer to the city centre.